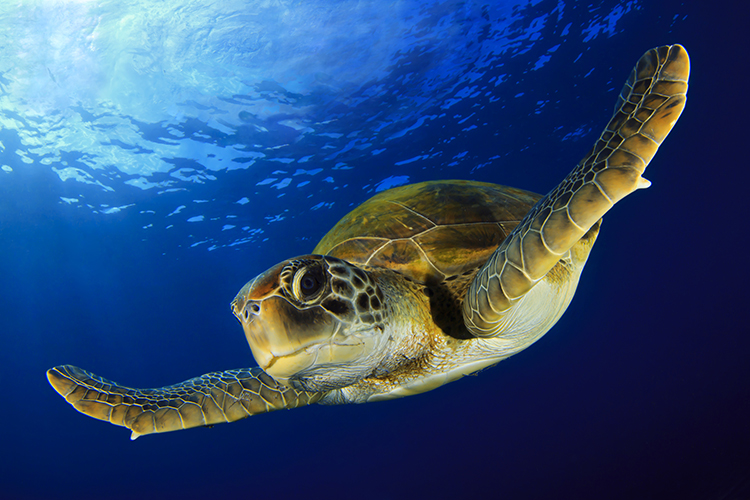 Ratua Island Resort and Spa might be the most relaxing place in the world, but for those who like to be active there are plenty of adventures to be had.

Paddle boarding is a favourite pastime of many a guest giving you the opportunity to see our graceful sea turtles one of which is a resident out the front of the resort and can be seen daily at breakfast, lunch and dinner. He has been seen so often we have named him Ralph. He mooches about the surface keeping a watchful eye on the goings on at the resort.

Kayaking and canoeing will take you on an exploration around the island itself to a private beach lagoon for those wanting to escape and feel like you are completely on your own. Kayaking to the blue hole across on the island of Malo has been likened to being in the amazon jungle with the tropical forest encroaching right over the river to the blue hole. You could even expect to see a dinosaur or two if they still walked the earth.

Some of the best snorkelling can be done at Ratua with exceptional visibility and aesthetically appealing coral. The coral reef and surrounding waters of Ratua Island have been made a marine reserve to protect the wildlife and thus contributing to the high diversity of fish species. The small fish on the shoreline put on a daily spectacle when the GT give chase, often jumping onto the shore giving the children and staff alike the opportunity to run and pick up the stranded fish and return them to the sea.

Some Of The Best Diving In The World

If scuba diving is your passion then diving the “SS President Coolidge is for you . This wreck is one of the most famous and most accessible sites to dive in Vanuatu. The luxury liner turned US troopship was sunk by mines in October 1942. All aboard were ordered to abandon ship and 5,340 persons got to shore safely. There were two fatalities in the sinking of the Coolidge. Fireman Robert Reid who was working in the engine room was killed when the first mine struck the ship. The second was Captain Elwood Joseph Euart who had safely disembarked from the Coolidge but on hearing that men were trapped in the infirmary returned to the ship through one of the sea doors successfully rescuing the men but was then unable to escape himself and went down with the ship.

The Coolidge is well preserved and serves as a home for a variety of tropical fish, turtles and moray eels. While you swim through the wreck look out for the belongings of the troops. See the chandeliers and the statue of ” The Lady ” giving evidence of her luxurious past. This wreck is a must do for all divers.

Another popular diving and snorkelling spot is ” Million Dollar Point ” After WW ll the United States Military disposed of large quantities of war machinery. Trucks, cranes, bulldozers, tanks etc all becoming an artificial reef for a wide variety of fish and sea life. Another must do if you love history beneath the surface of the South Pacific waters.

Plenty To Do Above The Water Too!

We have fishing charters available for those who want to wrangle a Blue Marlin. We can partner with any operator.

With the Captain, crew, gear and refreshments supplied for the day, all you have to worry about is catching the big one!

Mountain bikes are available for those wanting to explore the island at their own pace.

Crab hunting is a enjoyable pastime for children with the staff although we do not hunt or eat the endangered coconut crab.

Ratua Is Your Own Private Island

No matter what type of holiday you want there is much to choose from here.

Whether it’s a nice relaxing time on the beach with a cocktail, or an adventure-packed trip with local wildlife, Ratua Island Resort and Spa offers packages for all types of holiday-makers.

From the serious fisherman, to the relaxed family vacation, there are many activities to keep you entertained during your stay.

If you want to mix land and water adventures into one unforgettable experience, we have the unforgettable swimming with the horses and a guided tour horse ride across the entire island so you can learn all about the local history as you go.

If you would like to book your holiday of a lifetime, then don’t hesitate.

Contact us today or head on over to our Facebook page for the latest photos and news.

Let’s get the ball rolling on the greatest adventure you’ll ever have!